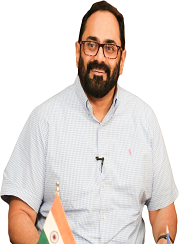 Minister of State in the Ministry of Skill Development and Entrepreneurship; and Ministry of Electronics and Information Technology

Senior Design Engineer and then CPU Architect at Intel’s Microprocessor team Was on the Intel 80486 Design team and then on the Architecture team of the path breaking Pentium team. Worked under legendary Vin Dham and current Intel CEO Pat Gelsinger.

He built India’s then largest Cellular network and being the first to and simultaneously deliver this Technology to Mumbai, Kerala, Puducherry, Goa, Tamil Nadu, Maharashtra when almost all others were doing so in one or two small markets.

He was a significant contributor to creation of Independent regulator TRAI and the New Telecom Policy NTP’99 that led to dramatic growth and success of the Cellular Sector.

He was a significant contributor to creation of Independent regulator TRAI and the New Telecom Policy NTP’99 that led to dramatic growth and success of the Cellular Sector. He remained invested and active in the sector and was the only one not to be embroiled in any of the scams and corruption that gripped the sector. Exited the sector when he saw the advent of Raja Raj in 2006.

Founded Jupiter Capital as a private Equity investor in 2006 and was Chairman till 2014.

Has invested and created many successful brands and franchises in Media, Technology, Infrastructure

2G- In 2007 was first to raise 2G Scam issue in Parliament. At great personal risk, he was only person to push back against the heavy lobbying and pressure of Telcos including big names on the issue of Spectrum Auction. He was single handedly responsible to ensure the 3G auction despite a concerted campaign in Media and in Parliament. The resulting 3G auction served to expose the value of free 2G spectrum being given away and the Country today generates lakhs of Crores from these auctions which otherwise would have accrued in value to these Telcos. Fighting the 2G scam was done as Independent MP at great personal risk and cost.

PIL for Section 66A- He was first to raise it in Parliament and oppose UPA’s misuse of draconian Sec 66A of IT Act. Raised it repeatedly in Parliament and got media awareness on this. Was active petitioner in the PIL in the Supreme Court that struck down Sec 66A. Was nominated for Index Freedom of Expression award for year.

On two critical issues, opposed the UPA governments move to restrict and change the nature of the Internet. On Net neutrality, opposed the UPA governments efforts to allow Telcos to control and regulate access to the Internet and ensured that the TRAI and Government reversed the Telco inspired move – in Parliament and through a mass public campaign outside Parliament.

Also single handedly created awareness about and stopped the Manmohan Singh Government’s efforts to back China’s attempt to move Global Internet regulation to a United Nation Bureaucratic organization UN-CIRP. It took Narendra Modi Government to finally reverse this position and continue to allow Internet to be a free and open global network without Government control.

From 2009 was the sole voice in and outside Parliament to oppose the UPAs Aadhaar architecture and design – including lack of legislative backing, lack of Privacy protection, lack of integration with National Population Register and its very dangerously lax verification process. All of which were finally addressed only after PM Narendra Modi became PM.

Public sector Bank NPAs- In 2010 he was first to raise NPA issue and Crony lending by PSBs lending to favourite UPA Corporates till 2014. Written and spoken extensively about reforms in the banking sector in particular, financial sector expansion and role of RBI.

OROP- Since 2006, Single handedly pushed the OROP issue in and outside Parliament, including piloting a Parliament Petitions Committee Report that found in favour of OROP.

Voting Rights for the Indian Armed Forces - After repeated efforts with EC and then Government failed, approached the Supreme Court via a PIL and ensured he got voting rights for armed forces and families. He also pushed EC to ensure remote units could vote. Voter turnout of armed forces has increased in state elections in Uttarakhand and UP.

Supporting Bravehearts and their families- Repaired and reconstructed CQMH Abdul Hamid’s memorial when the then Government failed to intervene and protect PVC Braveheart’s memorial. Through Flags of Honor Foundation, has helped countless scores of Veteran and Braveheart families all over the country.

Honoured by Army’s Western Command GOC-in Commendation for his work for the Armed Forces and Veterans.

Karnataka Floods: In 2009 Conceived and executed with Government of Karnataka, an unprecedented public private initiative ‘Aasare’ – to help rebuild the thousands of destroyed homes and villages in the Floods. He succeeded in roping more than 50 corporates who committed to build 80,000 houses for the flood affected families. He personally adopted three villages and build several hundred homes.

Plan Bengaluru- in 2009-2010 who worked for a vision for Bangalore and long-term integrated plan for the development of the city. As the Convenor of the Agenda for Bengaluru Infrastructure and Development (ABIDe) Task Force, he authored PlanBengaluru2020 - a Vision Document and a blueprint for the development of the city to make Bengaluru a world-class metropolis. This remains the first and only such plan for Bengaluru or any other city in the country. Through his NGO NBF, has done many initiatives for Bengaluru including reclaiming encroached lakes and land from builders, Protecting Residential neighbourhoods, Environment, Fighting City corruption, Rewarding Good citizen Organizations and Public servants etc.

RERA- Served on Select Committee of RERA Act and pushed actively to protect home buyer rights as per the vision of the PM, despite huge lobbying by real estate lobby to scuttle or weaken the bill. Also responsible for the draft rules to be created along with citizens interaction with ministry

GST- Served on select committee of GST and also in in financial and regular media advocacy for these reforms and positioned it as a reformer for the long term which will increase tax compliance.

Economic Policy Advocacy- Actively spoke in parliament on each budget from 2006- 2021. Have spoken about 5 Trillion Dollar Economy roadmap and initiatives required in Parliament, in committees and in various Articles. Participated in almost every Budget discussion and has consistently advocated Investment and Economic growth as the main answer to transforming lives of Indians poor and Vulnerable.

Aadhar- Made many suggestions to this government to improve Aadhar so that it can be used to fulfill PM’s vision. Even had meetings with Aadhar to explain safeguards required.

Digital Consumer Rights, Call Drops, Net Neutrality- Consumer Protection and Rights- he was first to raise in Parliament and mobilize public opinion. He has pursued the cause of the consumer relentlessly till the current situation where TRAI and government are fully supporting his consumer position. He has personally responded in detail to every major TRAI consultation with his suggestions in an open and transparent manner.

Cryptocurrencies- Flagged in 2016 the emerging challenges of regulating Crypto currencies.

5G Advocate of a more strategic plan for 5G – as a next generation technology for Mobile Internet and also a first-generation Technology of M2M and IOT.

Dakota DC3 Parasurama gifted to IAF- The Dakota “Parasurama” was accepted by the Chief of Air Staff into the IAF Vintage Fleet on 13 February 2018. The aircraft was bought by the MP from "scrap" and was restored in the United Kingdom and gifted to the IAF in flying condition. The Dakota has a crucial place in India’s History as it played a crucial role in Defence of Srinagar in Kashmir operations in 1947 war.

Parasurama is a regular feature on Republic Day and other IAF Fly pasts.

Protecting our Children -Since 2013 have run campaigns to create awareness and responses to the issue of Child Sexual abuse, Trafficking etc. Have galvanized public and media support to this issue and also have helped Parents and Parent organizations fight cases directly in many cases. Have initiated and supported many seminars and discussions under the NCPOC banner.

Citizenship Amendment Bill- consistently campaigned for implementation of CAA in India and exposing lies and hypocrisy of the opposition.

One Nation One Election- Advocating that it has potential to deliver political and economic dividends for citizens.

Amending PCA Act, 1960- Consistently raised the issue on the need to review the provisions of Prevention of Cruelty to Animals (PCA) Act, 1960, and advocated for stricter punishments to be meted out and Govt agreed to it solely because of his intervention.

Protect and Support MSMEs- First of its kind initiative to support MSMSEs through lockdown and consistently raise their problems with the FM.